Welcome back after a long time without coming together! We really missed the hills, lakes, valleys, glens and mountains during lockdown. We also missed you!!

Let’s kick off our SIÚIL 2021 walking programme reasonably gently in order to ease our way back into things. We shall recommence with an exhilarating walk up Beann Mhadagáin with some of our good friends i mBéal Feirste. This is always a popular walk and places will be reserved on a first come, first served basis.

This is a great time to join our group, especially if you’re preparing yourself for the big Lúnasa walk, Camino Mhacha, this year! 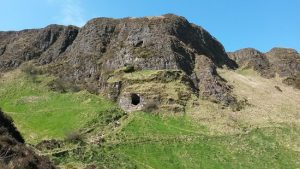 The coach will leave from Cultúrlann Aonach Mhacha at 10am sharp on Saturday 29th May and places can be reserved by contacting failte@aonachmhacha.com or 028 37998111.

******Please bring a GPS enabled phone, appropriate clothing for the hills, good walking boots and a rucksack with water, snacks and basic first aid materials. A basic level of fitness is required for all walks.

We are looking forward to seeing you all again! 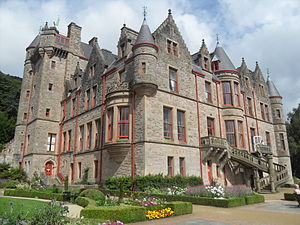 Beann Mhadagáin [Madagán’s Peak] is named after a king of Ulster called Madagán who died in 856AD. Known in English as Cave Hill, this rocky prominence overlooking the city of Belfast reaches a height of 368 metres (1,207 ft). It is marked by basalt cliffs and caves, and its distinguishing feature is ‘Napoleon’s Nose’, a tall cliff which resembles the profile of the emperor Napoleon. On top of this are the remains of an ancient promontory fort called Dún Mhic Airt [McArt’s Fort].

The summits offers stunning views southwards over Belfast City and Lough towards the Mourne Mountains, Scrabo Tower and Slieve Croob. On a clear day, the eastern prospect reveals views of Carrickfergus, the Mull of Galloway in Scotland and the Isle of Man

Cave Hill is thought to be the inspiration for Jonathan Swift’s Gulliver’s Travels. Swift imagined that Cave Hill resembled the shape of a sleeping giant safeguarding the city.

There are three large man-made caves, and it is postulated that they were originally excavated for iron-mining. Adjacent to the lowest cave is ‘The Devil’s Punchbowl’, also sometimes called ‘The Devil’s Cauldron’, a site where ancient Gaelic farmers corralled their cattle. It is believed that the inhabitants of Dún Mhic Airt used the caves to store white foods for the winter and may have served as a refuge during times of attack.

The crowning stone Giant’s Chair of the O’Neill clan was apparently sited on Cave Hill summit until 1896 and gave its name to the nearby Throne Hospital.[citation needed]

On 1 June 1944, an American Air Force B-17 bomber crashed into Cave Hill during heavy fog, killing all ten crew instantly. The incident inspired Richard Attenborough’s film, Closing the Ring. Some scenes of the film were shot on Cave Hill..

Limestone was mined on the southern flanks of Cave Hill in Victorian times and transported to Belfast docks by way of a horse-worked railway along the Limestone Road. The railroad was abandoned in the 1890s.

In the 18th century the townsfolk of Belfast flocked there on Easter Monday for the Cave Hill fete, near a spring known as the ‘Volunteers’ Well’.

‘Armagh I’ People of the Year Awards