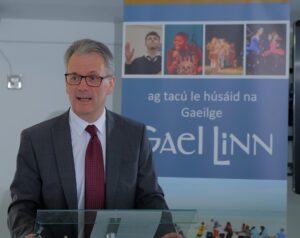 Gael Linn Board of Directors recently announced that Aonach Mhacha Director  Réamonn Ó Ciaráin has been appointed to the role of CEO of their organisation. Réamonn began working with Gael Linn in 1993, was promoted to manager in 2003 and to Director of Education in 2020. Réamonn has authored three books on Cúchulainn which were published by Gael Linn, as well articles in a variety of publications.

He has held many officer roles within the GAA at county level, as well its National Committee for the Irish Language. Réamonn has a long connection with ULTACH Trust and became its Chairman in 2019. He has been a member of the Board of Governors of St. Catherine’s College, Armagh since 2006, as well as being a former Chairman of An tUltach, the Comhaltas Uladh magazine. Réamonn is married to Dolores and they have two children, Alana and Caoilte.

“I first began collaborating with Réamonn over 22 years ago in my capacity as Chairperson of Cumann Pobail Dhroim Bhríde.

“In the late 1990s, I visited him in Oifig Gael Linn on Upper English Street – a mere stone’s throw from where we eventually ended up working together in what is now the new Cultúrlann – to discuss the potential for some Irish language community projects in Armagh City.

“Prior to being appointed as a Community Development Officer with Armagh City & District Council in 2004, I had successfully secured money through DSD’s Neighbourhood Renewal Scheme in order to develop the first floor of the Cathedral Road Complex into a community facility for West Armagh Consortium. I invited Réamonn and the Gael Linn team to take an office in the new facility, where we worked together and collaborated in adjacent offices until 2009.

“We initially began to cooperate on a range of Irish language projects including Campa Mhacha, which quickly became and remains a popular summer scheme for children attending Irish medium schools in Armagh.

“It soon became obvious to both Réamonn and I that a longer term strategic plan was required to meet the needs of the burgeoning Irish language community in Armagh, including the needs of hundreds of children and their families in the Irish Medium Education Sector. In 2008, Réamonn and I put together a business case for our first Irish language social enterprise CAIRDE Teoranta, with mentoring and assistance from Newry & Mourne Cooperative Enterprise Agency.

“This was to be the first of two successful worker cooperatives that we created together. The second, Cultúrlann Aonach Mhacha, came in 2011 and ultimately culminated in the building of the bespoke £2.3million Irish language centre that takes pride of place in The Shambles area of Armagh City today.

“During all my time working in the Irish language and community development sectors in Armagh since the 1990s, Réamonn Ó Ciaráin has been the one constant source of support, cooperation and encouragement. We have achieved much in our work  together and have positioned the Irish language and the beautiful new Cultúrlann at the epicentre of civic and cultural life in the ancient Gaelic city of Ard Mhacha.

“While Réamonn’s relocation to the capital to take up his new position as CEO of Gael Linn is a reason for celebration and nothing less than due recognition of his organisational and managerial talents, I shall miss his daily presence in Ard Mhacha, where we have dared to dream big dreams, strategised, laughed, conspired and grown as individuals in our respective roles over two decades.

“Everyone here at Cultúrlann Aonach Mhacha wishes Réamonn well in his new role and we will continue to meet regularly with him as a Director of our organisation as we work together to develop and improve our facilities and services for the Irish language community in the Cathedral City”.

“Commenting on his new challenge, Réamonn said: ‘I very much look forward to taking up this new role in an organisation which has so greatly influenced awareness in relation to the Irish language and its heritage for almost 70 years. Gael Linn has a committed and capable team and I welcome the prospect of working closely with them in the future to achieve Gael Linn’s objectives.”

‘Armagh I’ People of the Year Awards