Pádraig Ó Baoighill was born and raised in Ranafast in the Donegal Gaeltacht renowned for its many esteemed writers, musicians and artists.

He was inspired to write by local writers: Séamus & Seosamh Mac Grianna, Eoghan Ó Domhnaill, Niall Ó Domhnaill and Tadhg Ó Rabhartaigh. In Ranafast National School, he read most of the Irish books from the library arranged by the principal, and he became a voracious reader henceforth. He attended St Eunan’s College, Letterkenny (1948–1952) and enrolled in University College Dublin (UCD) in 1953 to study Celtic Studies.

Following a short teaching term in Buncrana (1953), he commenced work with Gael Linn during its inception in May 1953; he was promoted to Regional Manager in Ulster (1954) and then to National Development Manager in Dublin (1970).

In the early 1950’s he played Gaelic football with Kickham’s GFC, Dublin and thence began a long career writing about Gaelic Games activities in magazines such as Gaelic Weekly, Gaelic Sport, Gaelic World, Hogan Stand and a series on the Donegal Gaeltacht in the Irish Press (1955). Similarly, he wrote articles for many Irish language periodicals, including Comhar, An t-Ultach, Feasta, Rosc, Deirdre, Inniu, and an Irish column in The Irish News (1980’s).

When he retired in 1992, he dedicated his time to fulltime writing and his first book of short stories An Coilleach Troda was published (Coiscéim, 1993). This was followed by Óglach na Rosann (Coiscéim, 1994) — a book on the War of Independence in the Rosses, Donegal.

Pádraig has published extensively over the last thirty years and his most noteworthy works include: Nally as Maigh Eo (Coiscéim, 1999) — a biography of the champion athlete from Mayo for whom the Nally Stand, Croke Park is named; Ó Ghleann go Fánaid (Coiscéim, 2000 & 2008) — an impressive travel book for tourists to the Donegal area, and Rabbie Burns: An Nasc le hÉirinn (Coiscéim, 2015) — a tome of a biography on the famous Scottish poet.

Due to his continuous interest and dedication to the Gaeltacht area, he wrote, and broadcast a series called ‘Dúchas’ on Radio na Gaeltachta (2000 & 2018), featuring native Irish speakers from the Donegal breac Gaeltachtaí, some of who were recorded for the first, and last time.

An Capall Dubh agus Scéalta Eile (Coiscéim, 2018), is a collection of 22 short stories, in which his language and his subject matter rich in traditional material, has received positive critical acclaim among contemporary Irish-language scholars and academics. He was awarded an Honorary Degree in Literature by the University of Ulster in 2005. 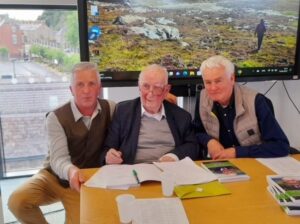